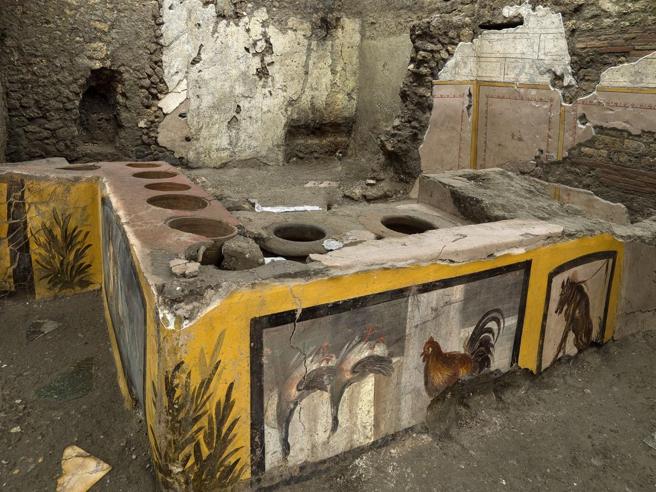 At the end of 2020, a discovery shook all the archeology lovers of the world.

In Pompei, where the excavations never stopped even during the lockdown, surfaces an almost intact Thermopolium, basically a diner.

This exceptional discovery reveals that colors and fragrances have been sealed for a long time, preserving until today. A journey among the lost savors of the city, which allowed researchers to piece together the habits and dietary uses of the romans living two thousand years ago.

In practical terms, it was a venue directly overlooking the street, with a brick counter where they put some jars containing food and drinks. In other words, the Thermopolium was to all intents and purposes a grocery shop selling street food.

Happy hours are not such a new concept, since street food already livened up the streets of the ancient Roman cities. Actually, this is not the only example of this type of shop discovered in Italy. Just in Pompei there are around 80, in addition to those found in Herculaneum and Ostia.

This last discovery is particularly important because of the artistic value of the still intact illustrations and of the possibility to discover ancient dishes. What emerged is that they had a simple cuisine, without exotic refinements: the dishes were made with what Pompei’s market offered, mostly meat and fish.

A piece of history preserved underground for more than two thousand years and which will be opened to public soon.

We at BBM have always been fascinated by our “ancestors” and by the street food activities which developed in the past. That is why, a couple of months ago, we wrote an article about the first vehicles used to transport food.

Did you know that the first to have this idea was a Texas farmer in 1866?

Discover more in the article “Food Trucks’ ancestor: a little bit of history“.

HOW TO CHOOSE THE IDEAL STREET FOOD VEHICLE FOR YOUR BUSINESS