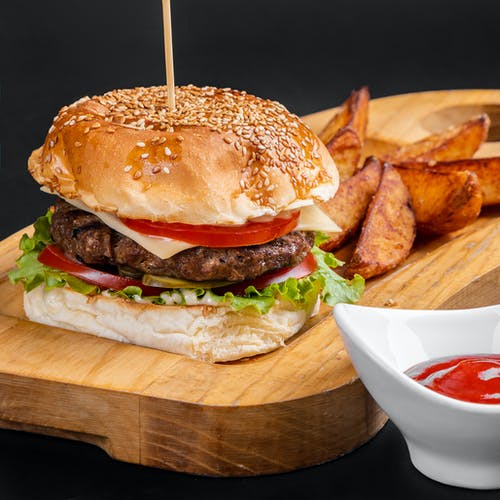 On May 28th we celebrate the International Hamburger Day. A meal made in U.S.A which has spread all around the world with several reinterpretations. The “hamburger” is named after Hamburg, the German city that in the 19th century was the place of departure for many European emigrants going to America. Aboard these big vessels they used to eat a dish made with minced meat. But when was the first hamburger officially born? The first classic hamburger, accompanied with bread, appeared for the first time at the St. Louis fair in 1904.

Nowadays hamburgers are among the favourite dishes in take-away cuisine: during the last lockdown it was the most ordered dish after pizza. Hamburgers are very common also in the Street Food world and that’s why we designed several trucks entirely dedicated to this specialty.

In occasion of the International Hamburger Day, we decided to introduce our Little BBQ, the ideal vehicle to prepare hamburgers. It is a roll-off kiosk, meaning a kiosk transportable with a truck or a trolley, which, once positioned, allows you to work on the ground and on the same level as your customers.

On the inside, it can be equipped with a specific kitchen to prepare grilled meat, including fry-tops, fryers and hobs. Then there can be refrigerators and freezers to store the food and an electric generator to have an independent truck. Must haves are the sink and the extraction hood, together with a dedicated compartment for gas bottles, only accessible from outside. An area for preparation and dispensing of the food is also a necessity to guarantee comfort and functionality to the clients.

Is your mouth already watering? Take a look at our sanwich bar food trucks and get inspired!

HOW TO CHOOSE THE IDEAL STREET FOOD VEHICLE FOR YOUR BUSINESS

L’AMERICANO: PERFECT FOR THOSE WHO WANT TO LEAVE THEIR MARK!